I thought I should come back and give an update on me and “Maria”.

I am doing much better. I licked my wound and it healed up nicely, I’ve been eating good, gained a little weight back and I’m back to prowling around to the dismay of all of my prey.

Momma went out to check the trap at about 10:30pm and to her surprise, there was “Maria” not looking too happy.

Momma talked sweet nothings to “her” and covered the trap with a nice red blankie so “Maria” would feel more safe. Momma left one side open so “Maria” could look out.

Now, Momma felt bad that “Maria” got caught so early and had to stay in the trap all night. Momma and PawPaw checked on “her” first thing in the morning and Momma freaked out because she thought “Maria” had eaten that huge red blankie! It was gone! Gone off the top of the cage! Turns out “Maria” had pulled that rather large red blankie in thru one of the very small holes (squares) into the trap and was sleeping on it. You can see the red blankie in the photo.

Momma showed us prowlers that “Maria” was not able to terrorize us anymore. Now, Momma and PawPaw brainstormed a lot of ideas and plans for “Maria” like relocation, Humane Society, Shelter, etc. Well, relocation didn’t feel right since this is “Maria’s” home for a few years now and they didn’t like the idea of just dumping “her” somewhere and “her” not receiving any care. They wanted “Maria” to get fixed up properly and taken care of and then be placed as a barn cat. So, they called the Humane Society where me and Floki came from and the Shelter where Zoe came from but both were full!

Momma even called up the Mennonite community to see if “Maria” could find a home on one of their farms but they said their farms are already overrun with cats. Now what?

Momma had the idea to call our Vetrinarian to see if they had a list of farms looking for barn cats to see if someone would want “her”. When she called, they said they needed to check and they would call us back. Well, within 15 minutes they called back and said we could bring the cat right now into the Vet and he would fix “her”, give “her” shots, treat “her” for fleas and deworm “her” ~ for free! All we had to do was come pick her up afterwards, bring “her” home and set “her” free to live “her” life! Our Vet is a cat lover!

So, we brought “Maria” in at 9am and had “her” back at 1pm. When we picked “her” up, they informed Momma that “Maria” is a little boy! We could have told her that! So his name is officially, Mario. The vet said that Mario should calm down and be able to get along with all of us now. Mario had to hang out in a quiet spot until he was fully awake and we set him free in the backyard at 6pm so he wasn’t a prisoner for even 24 hours. He ran fast without looking back and Momma was sure he was super mad at us and we’d never see him again. That made her a little sad.

Plus someone made a comment that Momma mistreated Mario by forcing him into surgery and then poisoning him with vaccines and flea and dewormer medicine. At first, Momma felt bad but then we thought that was a little extreme.

Getting fixed up by the doctor and getting to go back to your regular life is way better than some other alternatives. Don’t ferget, Mario was beating me up on a daily basis! Momma actually had asked PawPaw awhile back if we could trap Mario and for Momma’s birthday if we could pay to get Mario all fixed up. PawPaw said no to that but as you can see it all worked out. Momma’s birthday is today. Ha ha!

Actually, Momma has seen Mario twice in the last couple of nights. He looks much more relaxed and like he feels better. He comes to hang out in the driveway and comes in the Barnage when no one’s looking to have a nice dinner. So, Mario is feral but he’s officially part of our family now and if he only wants to hang on the perimeter, that is ok. Maybe some day he will feel like moving closer into the circle but it’s up to him, the door is always open if he wants.

Unless he starts beating me up again but hopefully he wants to be my friend now because I’m a friendly kinda guy. In fact, Mario was probably taking my friendly gestures the wrong way before because I think Mario is a macho man. Living the tough life, he had to be tough to survive.

Thanks for stopping by and we’ll talk to you real soon!

If you love cats and their antics please come visit the Homestead Prowlers on YouTube.

Where To Find Homestead Prowlers 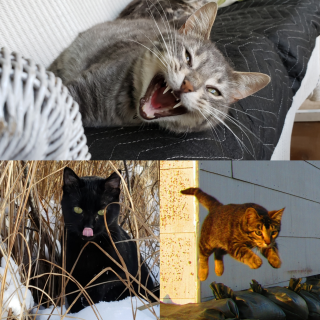